from Horse Doovers by BloodThirsty Vegans 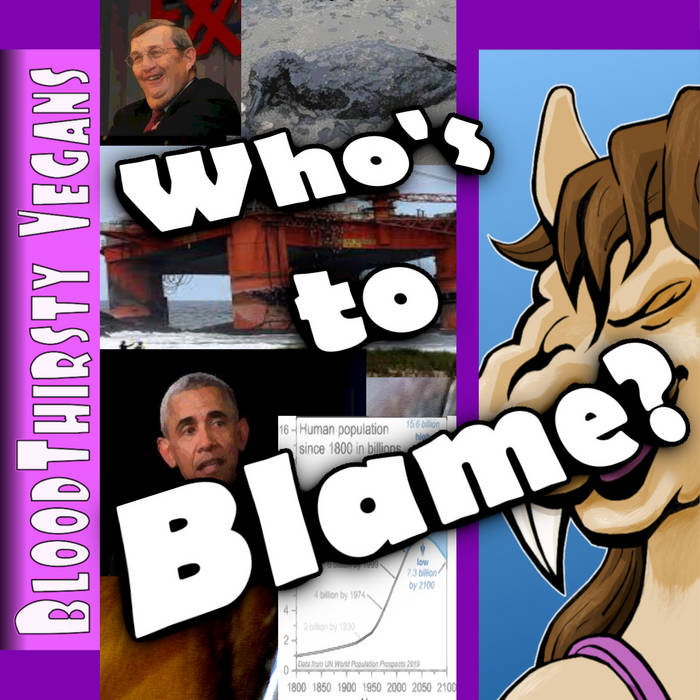 Drill way down into the ground
Ooh wee baby, now look what we found
Oh crap, now the ocean's brown
and Ooh now, who's to blame?

The sea's on fire, and the fish are dying
A Big cover-up, someone's lying
Whatever they're selling, we're still buying
Oh, now, who's to blame?

Blame the man for exploiting the poor
Blame yourself for wanting more
Blame Obama cause that's what he's for
and Oh now, who's to blame?

If you can't fix it fool then don't break it.
If it ain't yours why you tryin to take it?
Why you tryin'a rape every Earth you see naked
Once you frack your first Earth up you can't fake it
Shake n, bake n, break and straight forsake it
Can't lay in a bed that's dead? Why'd you make it?
you ain't got to come and confess, we gon' find you
So run and tell that to your pack, need I remind you
The love of money can blind you, and that's a shame
And we are the BTVs, Who's to Blame?
yeah who's to blame?

NPR's got the latest word
They're using Dawn to clean the birds
But Dawn's made with oil or haven't you heard?
And Oh, now, who's to blame?

All the judges had oil stock
I Don't see why it's such a shock
the Moratorium got blocked
and Ooh, now, who's to blame?

To fossil fuels we stay loyal
When will we stop burning oil?
When the Earth's so hot our blood will boil
Then who's left to blame?

BloodThirsty Vegans is a musical family that makes music (sweet, sweet music) about peace, love and understanding to unite the human family, foster respect for the interconnected web of life, and remind the tribes how liberating it was to dance the dances of freedom. ... more

Bandcamp Daily  your guide to the world of Bandcamp

Serena Cherry debuts her black metal project, plus a Pick from the Crypt block from Svalbard